The Disinformation Olympics: The COVID-19 Infodemic Has Only Just Begun

Find out why the infodemic that threatens our collective public health has only just begun. 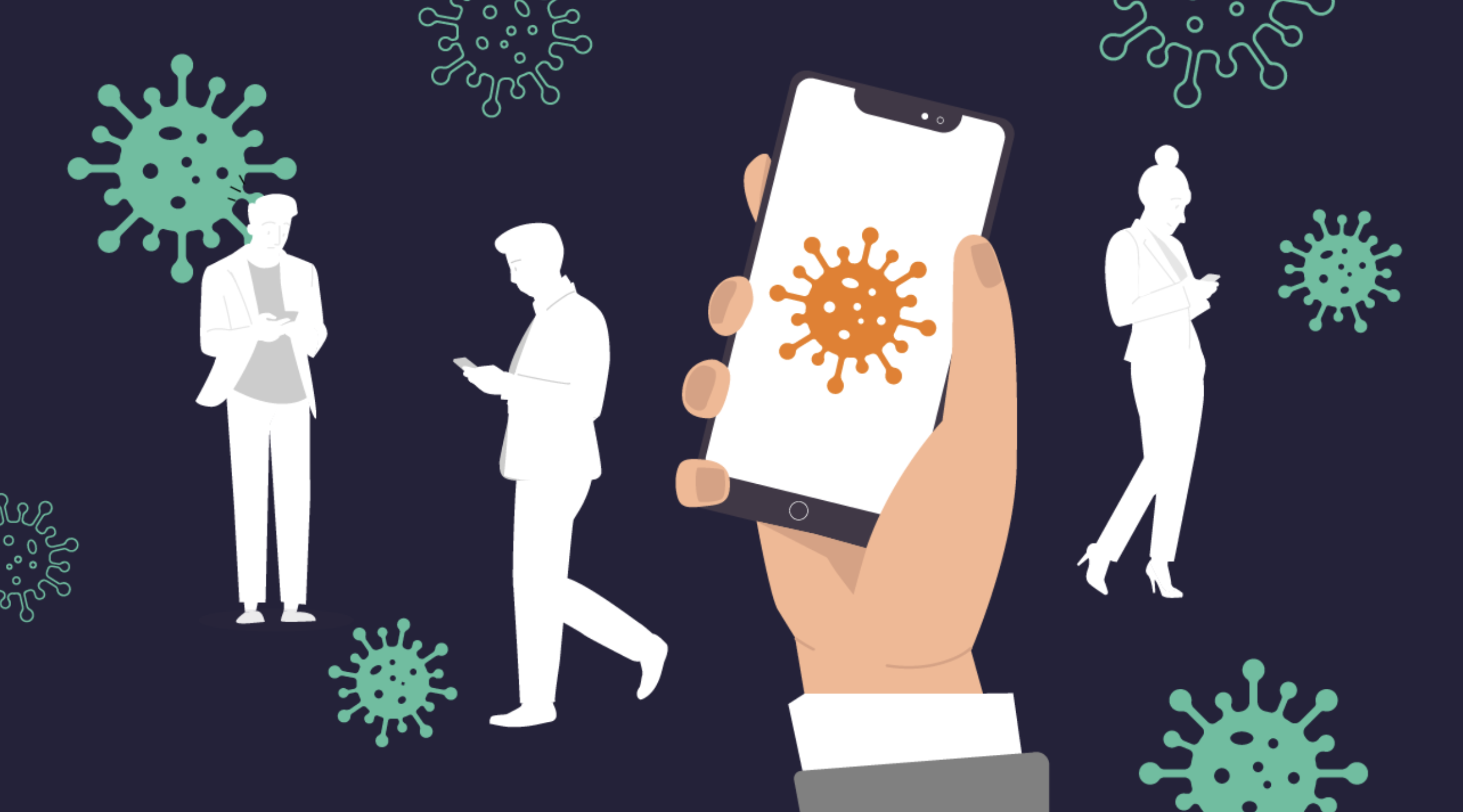 In these polarizing times, the emergence of the COVID-19 virus in early 2020 has not immediately provided a single political figure, nation-state or group to blame. There are no armies or insurgents to go to war with, and no governments to sanction. In a matter of months, societies across the world have been radically shaken by the mounting stress on our healthcare systems, curtailments on free movement and rising death tolls. Unfortunately, this is also a moment in which unscrupulous actors have stepped out from the shadows, offering promises of safety, security and reason. We are living in an era that has embraced farfetched conspiracies, alternative health treatments and political chicanery, rendering increasing numbers of us vulnerable to threat actors who seek to take advantage of this moment of widespread uncertainty and dislocation.

During periods of crisis, the deployment of disinformation and misinformation into our information ecosystems can cause a significant erosion of trust in societal institutions and harm to public health and community cohesion. Indeed, the deliberate use of information warfare has been leveraged for decades as a virtual weapon against the United States, both in times of war and in peace. Today, at one of our most vulnerable moments in history, it is imperative that harmful information manipulation campaigns are detected before they are able to cause serious damage to our societies at both the community and national levels.

At the time of writing, much remains still unknown regarding the COVID-19 virus. Medical professionals are yet to definitively understand its methods of transmission, symptoms or potential cures or preventions. In response to this unprecedented uncertainty, social media now overflows with claims that pose a significant danger to public health. Self-proclaimed health experts give medical advice without professional qualifications or experience, suggesting that vitamins be taken at such high doses considered to be near-lethal with long-term use. A cure-all liquid containing an industrial bleaching agent is marketed as a ‘miracle supplement’ for preventing coronavirus infection. The list goes on – the COVID-19 pandemic is shaping up to become the Olympics of Disinformation, with more and more people potentially putting their health at risk for “something they saw on the Internet”. The question thus remains: why do such dangerous claims successfully attract attention, engagement and eager participants? 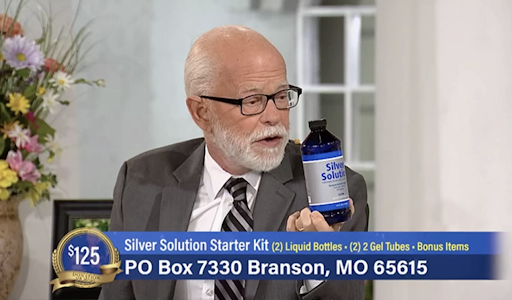 US televangelist Jim Bakker promotes his fraudulent ‘Silver Solution’ COVID-19 cure. In March 2020 the US FDA and FTC submitted written warnings to Bakker regarding Silver Solution’s potential to cause serious negative health side-effects, with lawsuits filed against Bakker in April 2020 (Minn Post)

Between the synthetic amplification of false claims on social media and sophisticated video hoaxes with high production value, many people find themselves exposed to online disinformation in trying times. Over the past few decades, the U.S. has witnessed growing trends towards skepticism and suspicion of perceived government overreach and mainstream medicine, making the current COVID-19 pandemic and its associated government lockdowns and leadership from national health agencies a fertile breeding ground to stoke divisive disinformation narratives. As is often the case with fake news and conspiracy, this growing distrust often germinates in genuine real-life issues such as the U.S. opioid crisis, where the confluence of predatory pharmaceutical industry entities and complicit government actors, medical insurers and healthcare workers caused the widespread overprescription of addictive drugs to the detriment of public health, all in the name of private profit.

Concern over legitimate issues can thus often be exacerbated by conspiracy theories that prey on existing authentic fears and uncertainties. As a result of these powerful disinformation narratives, we are now witnessing many people gravitating toward ideas, treatments, and products which are not based in verifiable science. From protestors who perceive mask wearing as a political choice rather than a public health measure, to the anti-vax movement or distrust of 5G cell phone towers as an alleged transmitter of COVID-19, when panic and fear is amplified, individuals run risk of losing sight of common sense in a bid to regain perceived control over their lives. This phenomenon is now happening on a global scale as a result of the COVID-19 pandemic. 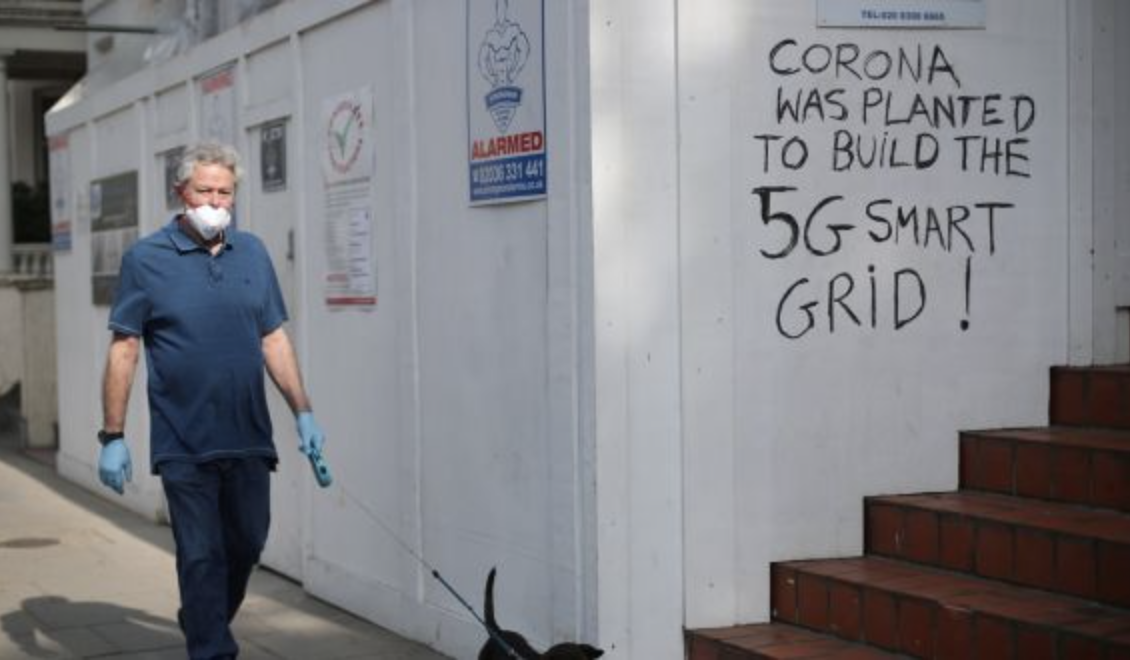 Pandemic Conspiracies Are Nothing New

Disinformation campaigns around public health long predate the current COVID-19 pandemic. An early example is the publication of a 1983 article in an Indian newspaper stating that the AIDS virus was deliberately manufactured by the U.S. government to kill African-Americans and homosexuals. Over the following years, this was backed up by further media coverage and hired “scientists” who publicly validated the story. The rumor began to spread across the world, particularly through African countries experiencing high levels of AIDS infections, before being picked up by mainstream U.S. news. Its origin? – the Soviet Union’s KGB.

This multimillion-dollar, years-long information ops effort by the KGB represented a concerted attempt to tarnish the international public image of the U.S. and sow discord among American citizens. Unlike today’s technological capabilities for instantaneous information sharing, the disinformation campaigns of the 1980s were propagated on a much slower trajectory. However, with less awareness of the far-reaching threat of disinformation and little in the way of funding to fight and debunk these fabrications, these KGB hoaxes were often successful in rooting themselves in the minds of many otherwise informed and intelligent individuals. This proved particularly true for an issue such as AIDS and HIV, whose relatively unknown properties and deadly consequences generated an atmosphere of panic and fear before the infection’s origins and methods of transmission became widely known. 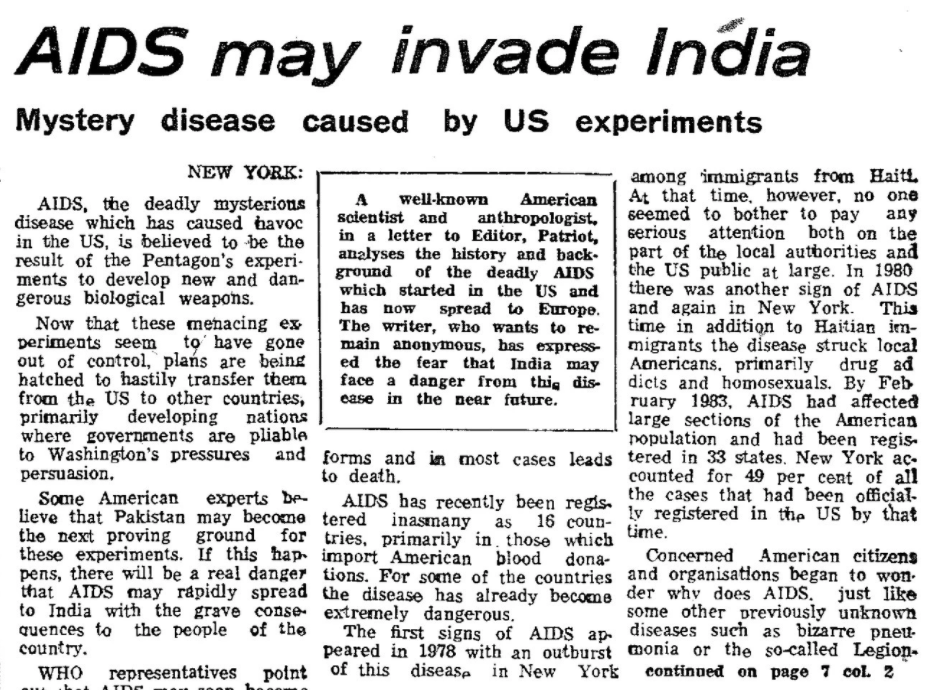 Excerpt from the original 1983 KGB-backed article alleging U.S. involvement in the creation of the AIDS virus (The Patriot, via New York Times)

In more recent history, the 2002 outbreak of the Severe Acute Respiratory Syndrome (SARS) virus in China precipitated a major socio-political crisis for the country as Chinese leadership stalled in their initial response to the virus before launching widespread containment measures. The government’s hesitation to share information on SARS with the rest of the world sparked a period of panic, anxiety and rumor-mongering regarding the virus’ origins and lethality both inside and outside of China.

Fast forward to the 2012 outbreak of Middle East respiratory syndrome (MERS) and the 2014 Ebola virus in West Africa where, unlike 2002, world populations had now entered the age of widespread digitally-networked global information-sharing. Primed by the ubiquity of smartphones and social media, this provided the perfect conditions for the mass scale dissemination of medical disinformation. For instance, at the height of the Ebola outbreak in Nigeria, a hoax spread on social media touting salt water as a preventative measure for the virus, leading to several deaths and widespread hospitalizations. The World Health Organization (WHO) worked with national governments around the globe to keep citizens informed of the genuine facts of these pandemics and address spurious medical advice in circulation, recognizing online disinformation as a major new roadblock in addressing public health emergencies in the twenty-first century.

Fear is a Force Multiplier for Disinformation and Conspiracies

The word “pandemic” alone instantly engenders an atmosphere of panic and fear: the mass breakout of an infectious disease with the potential to cause widespread loss of life. Fear reduces the ability for critical thinking, opening the door to our increased vulnerability to everything from poor medical advice to the wildest of conspiracy theories that suggest forces beyond our control are manipulating the world order.

Disinformation actors and organizations such as Russia’s Internet Research Agency (IRA) root their strategy in taking advantage of these fearful, uncertain environments to extend influence over populations. Social media messaging and propaganda videos are often specifically aimed at individuals identified as the most vulnerable to disinformation. This content is then shared over and over, until they become part of mainstream beliefs for many who are repeatedly exposed to such content. At the most extreme end, conspiracies can become the catalyst to drive offline behavior influenced by online chatter. In the last week alone at least two major real-world events related to COVID-19 conspiracies about “deep state cabals” with nefarious plots have taken place, as outlined below. 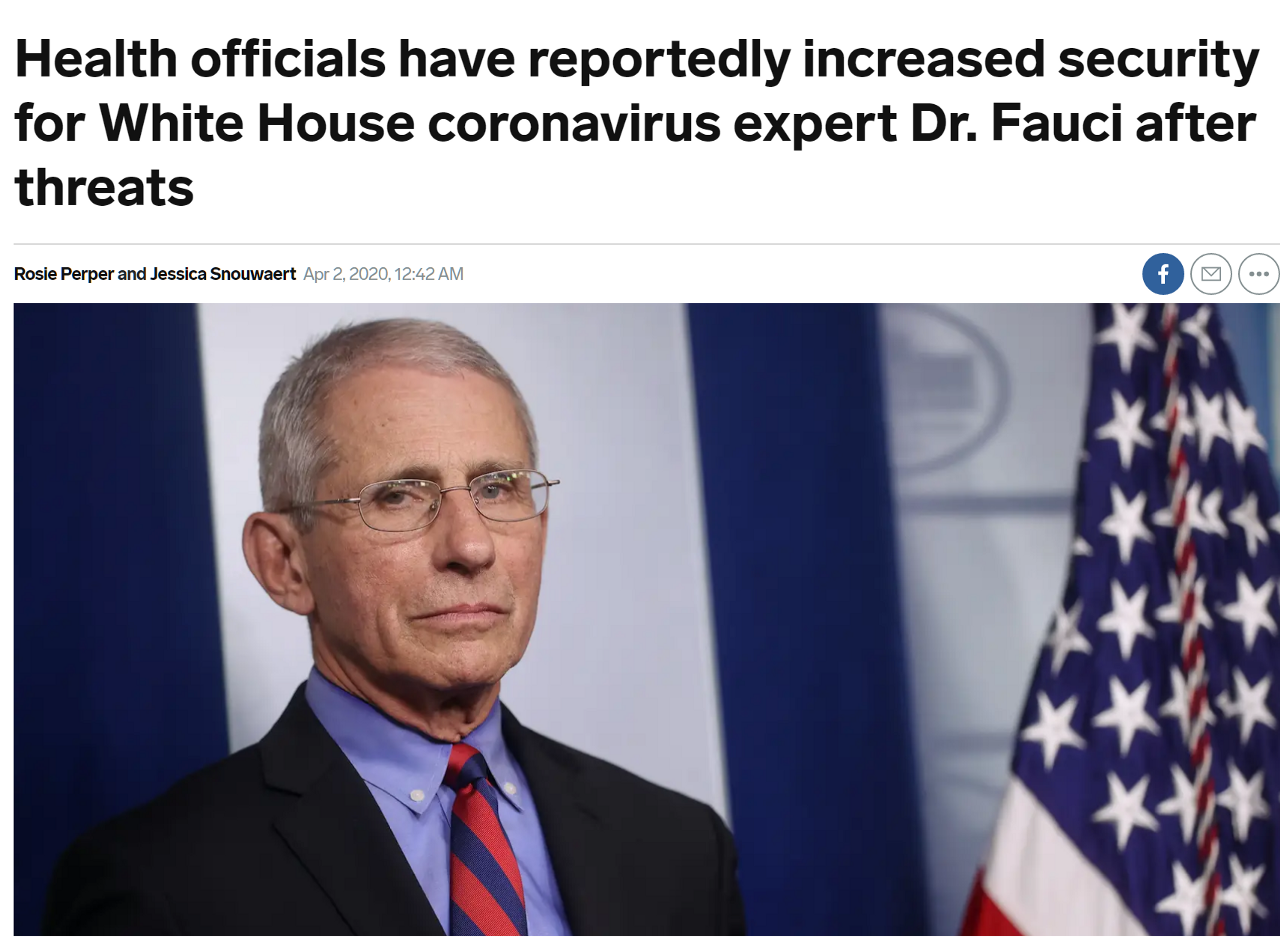 Dr. Anthony Fauci, the director of the National Institute of Allergy and Infectious Diseases, at the coronavirus task force daily briefing at the White House on March 25, 2020 (Jonathan Ernst/Reuters via Business Insider)

April 2, 2020: Conspiratorial narratives involving Dr Anthony Fauci (head of the US Centers for Disease and Prevention) resulted in a security detail being assigned to him after he received numerous death threats alleging that his leadership during the COVID-19 crisis purposely aimed to undermine President Donald Trump. 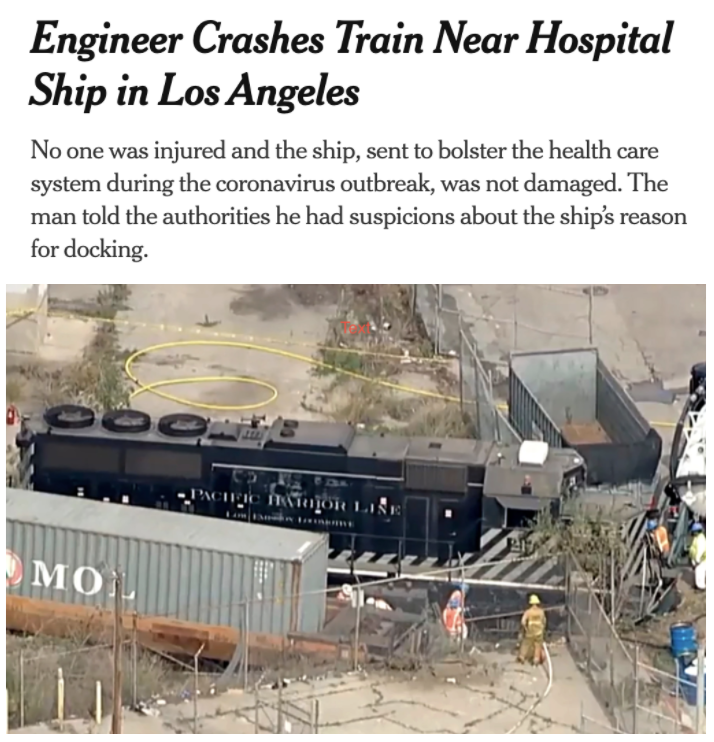 April 2, 2020: The QAnon conspiracy theory motivated train engineer Eduardo Moreno to derail his train in hopes of destroying a U.S. Navy hospital ship being used to treat COVID-19 patients in Los Angeles, which he believed was a front for hidden sinister activities. 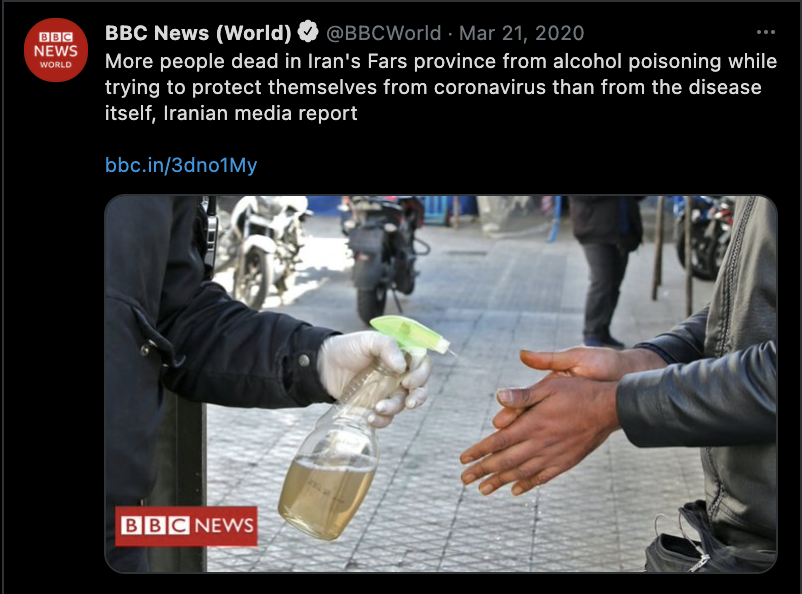 April 7, 2020: Iran reported 600 deaths and 3,000 hospitalizations after citizens following the advice of a dangerous medical hoax advocating high-concentration alcohol as a cure for COVID-19.
‍

How Can We Address Disinformation Threats?

Although information ops designed to manipulate public health crises are nothing new, the COVID-19 pandemic has exposed the dangers of disinformation in the digital age on a hitherto unprecedented scale. We are in dire need of information integrity that can intelligently compare multiple sources of varied data and offer sound analysis of what is manipulated and what is not. With the goal of disinformation actors to trigger emotional responses that will influence future opinions, actions and events, if left unaddressed, this poses a critical risk to the health and well-being of our societies.
‍
However, mere human assessment appears increasingly insufficient to detect, deter and mitigate malicious disinformation campaigns in light of the vast penetration and reach of both traditional and social media. At Blackbird.AI we believe the use of automated computerized systems mobilized at scale can detect, sort, identify, and assess the immense volumes of digital data that are generated online every day across the world. As the COVID-19 pandemic has recently shown, crises can arise and evolve at speed to overwhelm our known systems of governance and emergency response, even at the highest nation-state level. In the age of the Disinformation Olympics, the ability to understand what is real and what is not is paramount to saving future lives.